This year’s Surfest in the NSW city of Newcastle was noted for its big waves, keen competition – and three brave teenage surfers from Vanuatu.

The three teen surfers, Zaridah Taleo, 14, Elody Kalran and Angisi Mania both 13, were brought to Australia in February this year by Jirsch Sutherland Partner Stewart Free, to compete in the Maitland and Port Stephens Toyota High School Team Challenge at Merewether Beach. They were the first all-girl team from the Vanuatu Surfing Association (VSA). 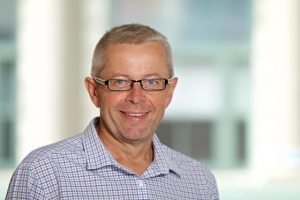 The girls, who travelled with team manager Risu Kalotiti and chaperone Sam Suendermann, belong to the VSA’s Solwata Sista, a program supported by Jirsch Sutherland Newcastle via Stewart’s Operation Do Something fundraising initiative.

“In addition to providing an avenue for schooling and career opportunities, the Solwata Sista program fosters gender empowerment and improved outcomes for girls throughout their lives. To date, it has been phenomenally successful,” explains Stewart.

While the girls have varying levels of surfing proficiency, they all took on the big waves with limitless enthusiasm and energy. “On top of competing with old basic surfboards, Vanuatu’s reef breaks don’t have rips so the girls had to quickly learn how to handle them and compete at the same time,” says Stewart with pride.

The problem of their old boards was solved by two random acts of kindness from their competitors. “It didn’t take long for the school kids to notice the surfboards the girls were riding on. On the second day, a local teen, Josh Stretton from San Clemente High School, who had seen the state of the boards from the day before, turned up with one of his very own high performance boards together with a whole stack of surf gear and gave it to the girls. Then the team from North Narrabeen Sports High School presented them with three of their own high performance boards,” says Stewart, blown away by their spur-of-the-moment generosity and kindness of the event’s competitors.

Zaridah, Elody and Angisi, who live in Pango, a small village south of Port Vila, had never been to Australia nor competed in an off-shore surfing competition. “The trip entailed quite a bit of preparation,” explains Stewart who planned the trip with his usual attention to detail. “We had to obtain approval from their village’s Chief and their school, as the competition was during term time.”

You can imagine the girls’ excitement visiting Australia for the first time. One of the highlights was meeting Australia’s seven-time World Champion surfer Layne Beachley who had in the past been a contributor to Operation Do Something. Layne generously donated funds from her Aim for the Stars foundation to the program and the girls proudly presented her with a Solwata Sista t-shirt.

When the competition wrapped up, Stewart and his family took the girls to the Hunter Valley Zoo, Sydney’s Opera House, Bondi Beach and Westfield, where they shopped till they dropped. “The shopping centres were definitely another highlight for them,” laughs Stewart, who as a father well knows how much girls love to shop.  And while clothes, shoes and presents for family back home were top of their lists, they also took home 15 surfboards from Stewart’s collection. “Their total arrival luggage weight was 63kg and when they left it had grown to 192kg!” says Stewart. Knowing how little the Vanuatu teachers have to work with, Stewart bought some much-needed school supplies for the girls to take home.

Stewart’s dedication to supporting Vanuatu’s communities began when a friend asked him to donate a surfboard to the Vanuatu Surfing Association. This sparked a holiday to the Pacific Island nation during which he and his family ventured beyond the resort and saw first-hand the communities’ need for funding. “That trip, 9 years ago, changed my life. The schools have very little. Visiting Vanuatu makes us appreciate what we take for granted,” says Stewart, who started Operation Do Something to raise much-needed funds and collect donations of clothes, sporting goods, laptops and educational materials. 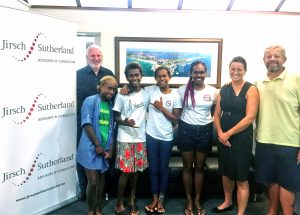 To date, Operation Do Something has raised over $110,000 and donated 130 surfboards, largely due to the support of his team at Newcastle Jirsch Sutherland. Stewart and his family regularly travel to Vanuatu to personally deliver the much-needed funds and supplies to families, schools and the VSA, which in addition to the Solwata Sista program, organises surfing clinics and competitions for local boys and girls. While in Vanuatu the Frees stay in their unique island home constructed from shipping containers.

This year was the fifth time Stewart has brought a surf team over from Vanuatu to compete – and going on its success it won’t be the last. If you would like to help fund next year’s all-boy team (girls again in 2019!) or support the local communities, you can donate to Stewart’s Operation Do Something via internet banking:

(Please add your name in the description field. Donations are not tax free.)