When Jirsch Sutherland Principal Michael Chan executed an eviction of tenants in a Sydney property that a bankrupt owned, it turned out the official notice did not include animals. Unable to find pet-friendly accommodation, the tenants had decided to leave their cat, goldfish, and three dogs behind.

“While eviction of occupants of a property is not rare, they generally take their belongings including pets with them,” says Michael. “This is the first incidence I’ve come across where animals were left behind.”

So, what was meant to be a routine process ended up involving canines, cats, cops, and a costly security bill.

Powwow for the bowwow

After the sheriff indicated that the animals were not in their jurisdiction, Michael sought to have the dogs – one of which appeared severely malnourished – temporarily secured in the backyard of the property.

“We made enquiries with various organisations dealing with animals including the RSPCA and the Animal Welfare League,” he explains. “At first, no one was willing to assist without the animals’ owner’s consent. So, we continued to feed and water them for the next few days.”

After attempting to break into the property on several occasions, the evicted tenant was caught in the act by the security team employ 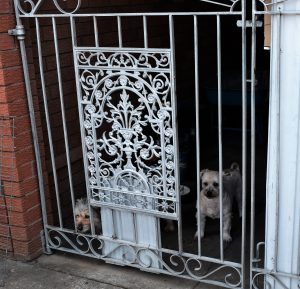 “That’s when the police were brought in,” says Michael. “Although no charges were brought against the previous occupants for the break in, the police did have concerns for the wellbeing of the animals and immediately contacted a person they knew at the RSPCA who attended the premises to inspect the animals. Sadly, the sick dog was put down immediately.”

The occupants subsequently collected one of the dogs while the remaining pets were sent to the RSPCA.

“More than six weeks later and the evicted tenant has effectively moved back in, which has forced us to change from nightly patrols to 24-7 security. That’s costing us around $5000-$6000 every week,” says Michael. “We’re going back to court again to get a writ to restrain her – all of this on top of trying to sell the property.”

What happens to a business lease when the landlord goes into Liquidation?

If a business’s lease is disclaimed due to the landlord filing for bankruptcy or going into liquidation, the Liquidator may exercise the right to bring the lease to an end under the Corporations Act. That means, as a tenant, you will lose all of the rights you once had under the lease.

This can have an adverse effect on your business, including:

A landlord declaring bankruptcy is a particular concern for a tenant that has a below-market lease or a tenant that has (or is in the midst of building) extensive leasehold improvements in its space. Even tenants with an above-market lease should look out for red flags if their landlord declares bankruptcy because they can still pursue a sale of the building and/or terminate the lease.