Surfers standing up for others

When Jirsch Sutherland Partner Stewart Free took his wife and children on holiday to Vanuatu 11 years ago, they had no idea that it would lead to a series of life-changing experiences – for their family and the remote communities living in the middle of the Pacific Ocean.

Before arriving on the island of Efate for some R&R in 2007, the Frees got wind of a program that donated surfboards to local kids. After contacting the organiser and arranging to bring over a couple of boards, they asked what else they could do.

“We were told there was a French-speaking school that basically had nothing, so we arranged for 37 backpacks filled with supplies for the 37 kindi kids, which we handed out when we arrived on the island,” Stewart recalls. “However, we soon learned there were 150-odd students, so the backpacks were basically cannibalised by the teachers to share with the rest of the school.”

The Frees then went about their idyllic holiday, more than 2,000 kilometres away from their home in Newcastle.

“It wasn’t until we got back several weeks later that my father, who was always involved in charitable endeavours, said something to me that really struck a chord, and that was, ‘Mate, what you’ve done is really good, but what you’ve really done is stroke your own ego. Keep doing it’. So, we did,” says Stewart.

“We went back the following year and have done so ever since. In fact, we built a house on the island and visit almost every school holidays.”

Uplifting communities, one crayon at a time 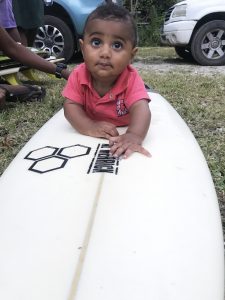 Operation Do Something, as Stewart calls it, has since raised more than $130,000 and donated more than 200 surfboards, fins, leg ropes and board repair equipment to the locals. The money has bought everything from crayons, pencils and laptops to clothes and soccer balls.

“A lot of the board riders in Newcastle, including the crew at Sandbah Surf Shop, are huge supporters and stockpile boards on my behalf,” Stewart explains. “Basically, everyone who surfs in Newcastle knows I’m the guy who takes boards to Vanuatu. I probably have over 90 boards in my garage right now because of the community’s generosity.”

And those kindergarten kids the Frees met more than a decade ago? They’re now high school students who have become part of their extended family. “I know every one of them,” Stewart says.

When we ask Stewart what drives him each year to coordinate supplies for Operation Do Something, he says the answer is very simple: “It centers us a family. There’s no TV so we play Uno, we surf, we sit around the pool, we catch up with friends; it’s family time and it’s the best time.”